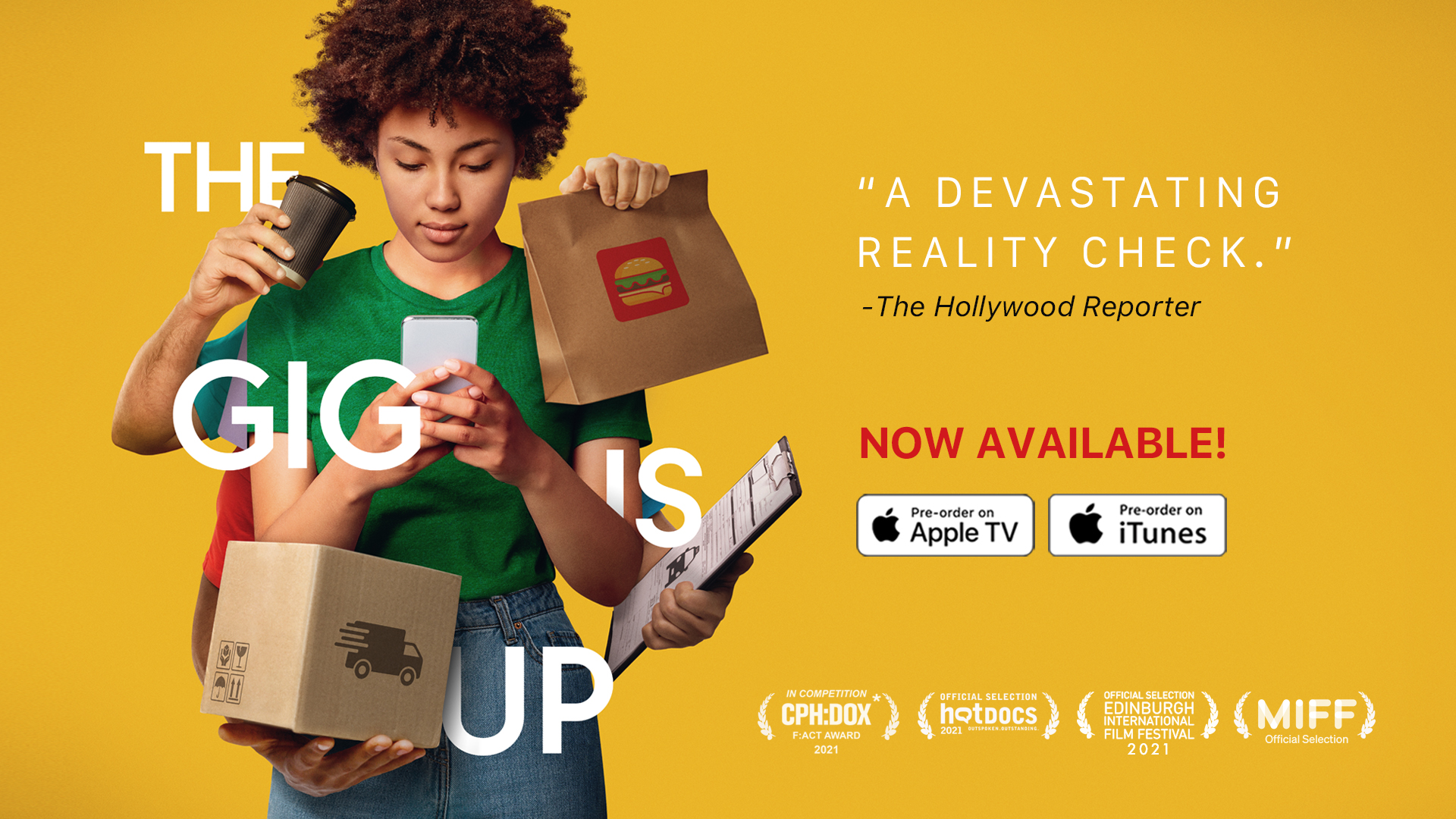 We had a great November showing The Gig is Up at RIDM in Montreal, followed by our New York premieres at DOC NYC, and then some wonderful audiences as part of Best of Fests at IDFA, the world’s largest documentary festival. Thank you to all the festivals and audiences for giving us some of our … END_OF_DOCUMENT_TOKEN_TO_BE_REPLACED

Great coverage of app-based gig workers movements this week, including wins on landmark delivery worker protections, in The New York Times, New York Mag & The City! AND, we are excited to announce our continuing festival tour with The Gig is Up! FIN Atlantic International Film Festival – Halifax in-person (September 17 at 4pm – … END_OF_DOCUMENT_TOKEN_TO_BE_REPLACED

US theatrical and UK streaming

The Gig is Up is now available for pre-order on Apple TV & iTunes ahead of our upcoming theatrical release in the US on October 9th. You can also now stream The Gig is Up in the UK on Dogwoof On Demand. Read about the release and watch the US trailer on Deadline:

More exciting news that THE GIG IS UP will have its official UK premiere at the incredible Edinburgh Film Festival. We are in stellar company alongside some amazing films and filmmakers. it’s truly an honour to share the film with audiences there, and to be part of bringing the story of gig workers to the … END_OF_DOCUMENT_TOKEN_TO_BE_REPLACED

We are incredibly honoured to have our Australian premiere at MIFF this year! So many dazzling films and filmmakers in this year’s festival. AND the film will play on screens! Tickets and more information below: https://miff.com.au/program/film/the-gig-is-up

DOXA is proud to kick off its 20th anniversary festival with The Gig is Up, directed by Shannon Walsh. The Gig is Up takes a close look at gig labour, a growing phenomenon and employment path that promises flexible hours, independence and open recruitment to workers around the world. From delivering food, to transporting passengers, to tagging … END_OF_DOCUMENT_TOKEN_TO_BE_REPLACED

We are thrilled to share our poster, designed by the team at Intermission and Dogwoof! And our trailer also dropped: It’s been a whirlwind, starting with CPH:DOX and launching our North American premiere at Hot Docs! We are eligible for the Audience Award at Hot Docs, so please do be sure to vote! We have … END_OF_DOCUMENT_TOKEN_TO_BE_REPLACED

“The Gig is Up” begins the festival tour

“THE GIG IS UP” is set to begin it’s festival tour! The world premiere  will take place at CPH:DOX in competition in Copenhagen  April 21-May 2 2021. The North America premiere at Hot Docs International Film Festival April 29-May  The film will also open Vancouver’s DOXA International Film Festival, May 6-16. If you are in Canada, you can get tickets … END_OF_DOCUMENT_TOKEN_TO_BE_REPLACED

The Gig is Up will have its World Premiere at CPH:DOX, and its North American premiere at Hot Docs! Thanks to our team and partners @Telefilm_Canada @cbcdocs @CMF_FMC @POINTDUJOURProd @ARTEfr @Dogwoof @post_moderne @premiumsound @DavidChalmin Shout out to the amazing folks who shared their stories & ideas: Al Hareth Ali Aloudi, Jason Edwards, Annette Moreno, Leila … END_OF_DOCUMENT_TOKEN_TO_BE_REPLACED

The site is up and the film is picture locked! We are so excited to share this doc with you, coming very soon! We are very grateful to our partners: Telefilm Theatrical Documentary Fund Rogers Group of Funds ARTE France CBC Documentary Channel

We promise not to bombard you! Updates delivered directly to your inbox.